Although many are confident that, in the aftermath of the life time bans issued to the former iBUYPOWER Counter-Strike players, match-fixing has been stamped out at the highest level of professional play, it is suspected that it continues in semi-professional matches. While we continue to be vigilant about this, with the advent of esports cash betting and so many small tournaments finding their way on to the sites that provide it, match fixing seems to be flourishing again. A little over two weeks ago we were provided with information that pointed to match fixing across several small tournaments and we interviewed a match-fixer who claimed to have earned $20,000 in two months from arranging fixed matches for a betting ring.

The matter was first brought to our attention when Stefan “ioswitch” Heesters, the owner of the small esports organisation Team Paria, contacted us. His team was due to play in the sixth season of the King of Nordic online cup where they would be representing Iceland in a game against Finland . Twenty four hours before the match Heesters was contacted on Steam by Karim “tropica” El Amrani, an administrator of a private Facebook group called “CSGO EU Pracc,” that contains many semi-professional players. The reasons for contacting him were very direct. “I assume you guys aren’t making that much money out of Paria? as you are the manager” he said. “The prize pool for KoN is $250 or $500 i believe and im 90% sure your team wont make it to the final or win the whole thing anyways. Your team might win against Finland because that lineup isn’t really good so if you and your team wants to make a bit of extra money, you can throw that match against Finland.” El Amrani then proceeded to break down the odds. Heesters wanted no part in a throw and immediately reached out to UK journalist Dom Sacco, who then referred him to us. 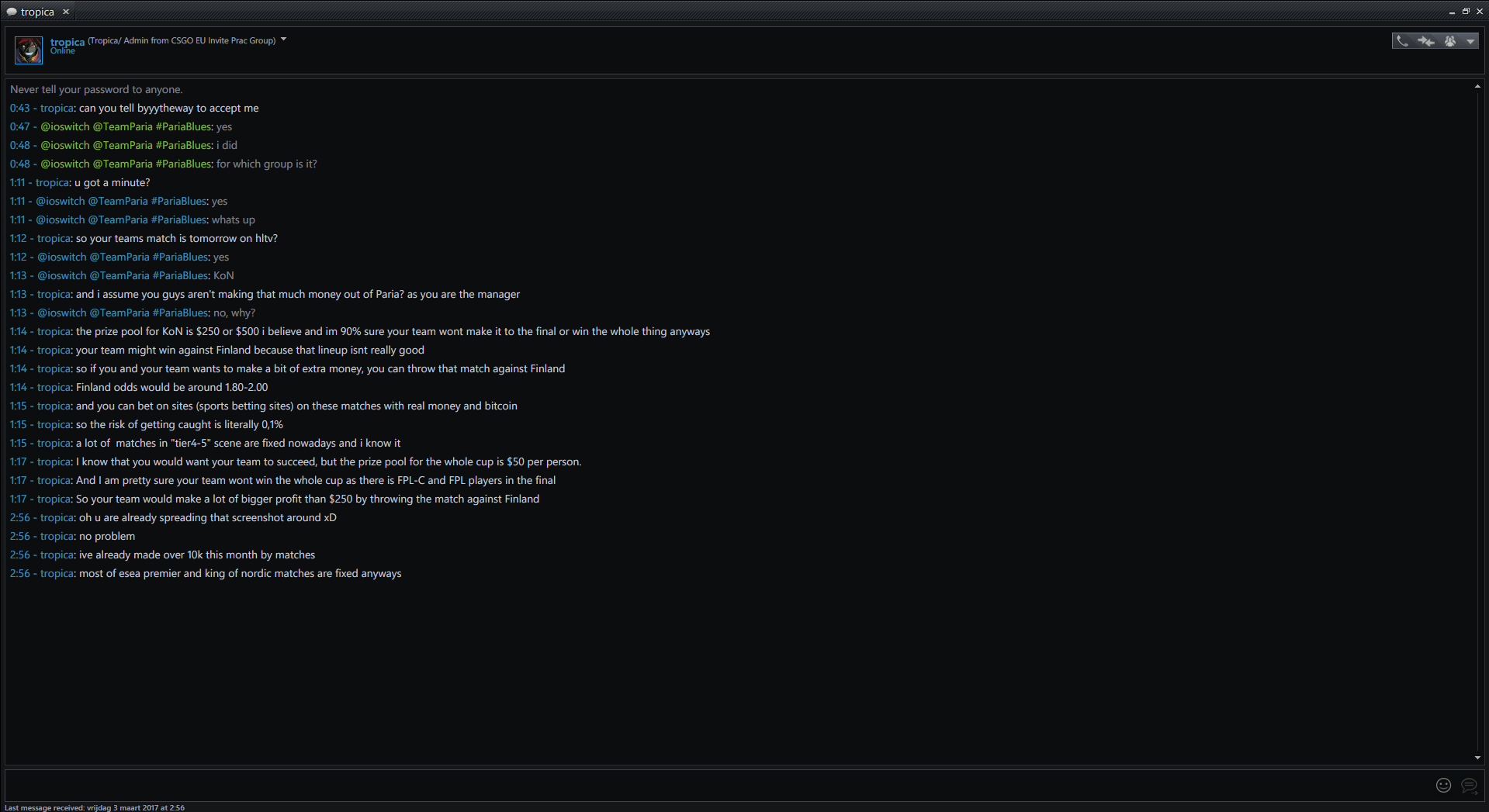 Although the exchange was short El Amrani did also add that the betting would be using real money or bitcoin, which he asserted would reduce the chances of getting caught, and that many low tier games were fixed in this manner. Heesters broke off the conversation and took a screenshot of the Steam chat and showed it to a few colleagues asking for advice or any more evidence of wrong doing. Immediately news of the screenshot was passed back to El Amrani, with one player advising that he had “wrecked his own reputation in 12 sentences.” He seemed mostly unphased repeating that many matches at this level were fixed and that he had made close to $20,000 over the past two months due to his role in arranging match fixes. Suspecting Heesters he then contacted him again and repeated his earnings and stated that “most” ESEA Premier and King of Nordic matches were fixed anyway.

Not wanting to take screenshots as damning evidence and wanting to give El Amrani a chance to explain his side of the story we reached out to him directly for an interview. We were surprised at how candid he was about his involvement. There were no denials. Instead he requested anonymity if he were to reveal others involved in the match fixes and provide evidence of their involvement, something he then later reneged on doing, which is why this report was delayed in publication. Below are the important highlights of the conversation, which took place over Steam. 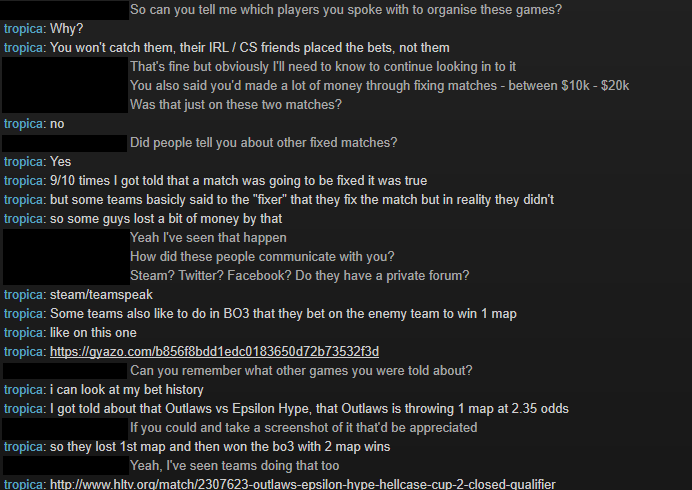 During our conversation he highlighted four matches that he assured were fixed and showed us evidence that he had placed decent sized bets on several of these matches using Nordic Bet. We don’t publish those here for privacy purposes and to preserve Nordic Bet’s investigation into the matter. He explained that he and several others he wouldn’t name were involved in arranging these throws and that players used friends and family to place bets for them so it would be impossible for them to be traced. He also stated that sometimes teams didn’t throw matches but would simply lose one map when the odds were high enough as this helped avoid arousing suspicion.

The games he claimed were fixed were the following:

iGame vs Outlaws at Assembly with Outlaws deliberately losing one map at high odds.

KoN Finland vs KoN Sweden, where the Finnish team that had beaten fnatic’s academy side lost to a poor by comparison Swedish mix.

Oulaws vs Epsilon in the Hellcase Cup Closed Qualifier with Outlaws deliberately losing one map at decent odds.

Fragsters vs Rush3d at the Dolphin CS Shoot Em Up 2 with Rush3d losing on purpose 2-1.

It is worth noting in this report that El Amrani seemed to get cold feet and said that he had no further evidence and couldn’t remember any more details.  We weighed up the validity of his claims after seeing his betting history and conversation history we had seen and decided the right thing to do to was to publish the matches he claimed were fixed. We are currently in contact with Nordic Bet in regards to this matter and will co-operate fully with any investigation they choose to launch. If you are a player who has been contacted about potentially throwing a match contact somebody and let them know. This report does not seek to incriminate any of the teams named and we are only repeating the claims made by the match-fixer for the purposes of this report. We expect Nordic Bet to be able to provide more information into the veracity of these claims as time moves on.

EDIT: Outlaws have tweeted denying the allegations. As previously stated in the report we are simply repeating the claims made by an established match-fixer who showed us his betting history. We do not endorse his claims beyond that and await the findings of the Nordic Bet investigation. We shall publish anything they find should it be made available to us.