ESPN’s reporting around the Overwatch League led to an embarrassing situation when their reporter found himself in the midst of an argument about journalistic hypocrisy. A story that was designed to highlight the negative actions of a professional Overwatch player for Dallas Fuel quickly backfired when fans of the team found that the reporter himself had used the same language the player was being condemned for using. Gawker owned Compete, Kotaku’s esports section, quickly ran with the story using the headline “Overwatch Pro Called An Opponent A “Fucking Faggot”; ESPN Reporter Who Broke Story Immediately Caught With Racist And Sexist Tweets.”

Jacob Wolf, the leading esports reporter at ESPN, had published a story in regards to Timo “Taimou” Kettunen, an Overwatch League player who represents the EnvyUs controlled brand Dallas Fuel. Dallas Fuel have found themselves making headlines for all the wrong reasons since the start of the Overwatch League, with Kettunen being the second player to be reported for making perceived homophobic slurs this year. Given that in that instance a suspension was issued the main part of the ESPN report focused on the expectation for similar punishment although Activision-Blizzard hadn’t responded with their intentions at the time of publishing.

Fans of Dallas Fuel and indeed the Overwatch League as a whole have been less than accepting of this new focus on professional player conduct. The ESPN article was removed from the Competitive Overwatch subreddit for being “low effort” content, with many fans downvoting it and criticisng the focus of the reporting. Wolf was not the only journalist in the firing line. Former ESPN reporter Rod “Slasher” Breslau was also accused of having a vendetta for publicising Kettunen’s lapse and other ones prior to that, with Fuel fans believing it was related to a public spat between Breslau and Fuel owner Mike “Hastr0” Rufail over a potential roster move.

In a perfect example of the phrase “play stupid games, win stupid prizes” the ESPN reporter hadn’t thought to check and scrub his own Twitter account of choice phrases that he had used in the past. Fans angered at what they perceived to be a witch-hunt against Dallas Fuel used the advanced search function to search for similar words that Kettunen had used in Wolf’s timeline. Going back as far as 2012 they were able to find the words “nigga” and “faggot.” Whoever had taken the screencaps decided to also tunnel in on his use of the word “cunt.” These tweets were then posted in response to both ESPN and Wolf’s Twitter threads publicising the Kettunen story, asking what action would be taken.

While certainly a terrible look for ESPN and Wolf it is worth adding for context the dates that the tweets were supposedly made Wolf would have been as young as thirteen years old and not a “public person.” The tweets were made in response to friends that made up the handful of followers that he had at the time. None of the tweets with the offending language were made since his recruitment by ESPN.

Kotaku’s esports vertical “Compete” has focused a lot on issues with player and personality behaviour. While they did report on Wolf’s original story they also decided editorially that Wolf’s transgressions should make up the bigger part of their report. Kotaku reporter Eric Van Allen quickly collated the offending tweets, archiving those that Wolf did not delete and then, under guidance from the vertical’s editor Dennis Young, sent them directly to ESPN management. From there the matter was taken up internally by ESPN. 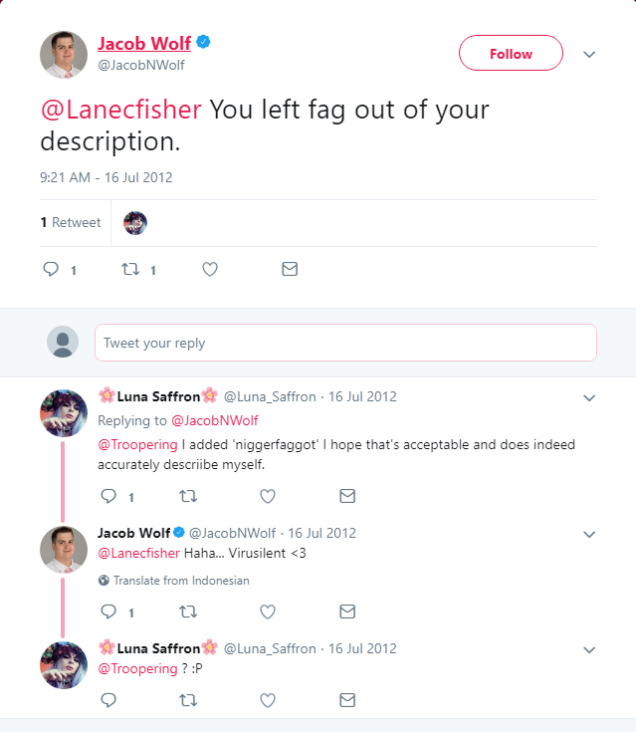 We reached out to Kotaku to ask about this methodology and perceived conflict of interest in being so involved in trying to have a rival reporter from a rival publication penalised or potentially fired. Young explained “I instructed Eric to contact ESPN, because not contacting ESPN in a story about them would be journalistic malpractice. I am opposed to all forms of ratting people out to their employers; our intent here was to get comment from ESPN when we were covering them.”

In regards to Wolf’s age Young added “We are aware that Jacob was 18 or 19 when ESPN hired him in 2016. Either ESPN knew that they hired someone who frequently and publicly called people “fag” “cunt” and “nigga,” or they didn’t fully vet a teenager who they were hiring for a role that is usually filled by adults.”

Kotaku’s reporting on this issue leaves several questions. Even if we ignore their attempts to portray the word “cunt” as a slur on par with terms that constitute racist and homophobic abuse, a move that would surely doom the majority of British and Australian people who see the word as a term of endearment, there was also something strange about Young’s own Twitter feed after publishing the story. The editor had deleted all tweets he had made prior to January this year. When asked why that was the case Young offered a “no comment.”

Given that Wolf was still a teenager when these comments were made we also asked Young if he felt there was ever a cut-off point for when someone can be held responsible for something they have said in the past. Young responded stating he wouldn’t answer any more questions in regards to what was an “ongoing” story. It wasn’t clear in which way it was ongoing.

Wolf himself issued an apology via his Twitter for the language he had used and stated that he had purged the words from his vocabulary. The statement read:

“Recently, comments I made between three to six years ago on social media were highlighted. They included unacceptable, hurtful language. I regret having ever written those comments and I apologize for them. I do not use those words anymore.

I posted these comments when I was 13 to 17 years old. I was immature and oblivious to the impact of language and how we choose to use it. That is not to excuse my past comments, however, they do not reflect who I am today. In the years since, I have grown, matured and experienced more in the world. I understand, and have seen up close, the power of words; that they can harm just as easily as they can inform, uplift and empower. I have and will continue to learn from my mistakes and improve as a person and journalist.”

It isn’t clear at this time what action, if any, ESPN have taken against their reporter although it seems likely the matter will be dealt with internally without any public statements being made.

Could not authenticate you.